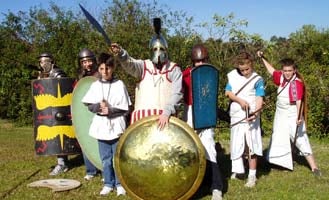 https://www.jamesadamshistoricenterprises.com/showsancien…
Ancient Show
School Show of Ancient Egypt, Greece and Rome
This is a military show covering the weapons, armour and tactics of these three civilizations.
It looks at the development, reasoning and logic behind these fighting styles. All three civilizations are covered in the show.
In the Egyptian part of the show I concentrate on the New Kingdom period, discussing its tactical advantages and problems. Discussion of the battles of Kadesh and Meddigio are included as well as the Siege of Jaffa.
Chinese tactics can also be mentioned as a contrast to the three civilizations mentioned above.
Student participation is included as part of the show with students being fitted out as Egyptian soldiers, Greek hopilites and Roman legionaries.
With Greece Hopilite warfare is demonstrated and the Persian Wars are discussed with the advantages of Hopilite warfare over Persian tactics explained. Phillip of Macedon and Alexander the Great are included and the reasons for their success explained.
The Roman section concentrates on the classical early imperial period. The Celts are also discussed and Roman tactics are explained as a reaction to the Celtic menace. Auxiliaries as well as Legionnaires are explained also.
James Adams
Meredith and I have organized an ancient history talk on Monday 16th May 10.30am-12.30pm at Faulconbridge Community Hall, 9-9a Home Street Faulconbridge with James Adams, cost $15 per attending child.
The suggested age for attendance is stage 3 and above due to the content. Younger siblings are welcome to play in the outdoor space whilst the talk is on.
If you could please fill out the google form to book your places and to receive payment details.
https://docs.google.com/…/1ugoQwoGGPL1j2R8oDL10…/edit…
Many thanks,
Sara and Meredith